I joined the World Health Organization in 1980, working in Geneva looking at global patterns of mortality. I was interested in this as a scientific problem and also as a way of using data for public health purposes. My (later) role at WHO as chief epidemiologist in the Health Statistics Division was to gather data and make sense out of it for global policy.

I met a young man, Christopher Murray, who was a Rhodes Scholar at Oxford who’d come from Harvard. He’s had a huge influence on my professional life. We started doing a study together in early 1990s called the Global Burden of Disease study and it was just the two of us: Murray and Lopez.

He had a barn in Maine and I would fly from Geneva to Boston, and we would drive up to Maine, often in 10 feet of snow, to work on the project.

There’s a recently published book called Epic Measures about the Global Burden of Disease study and in particular, Chris’ leading role in it. It has had a major impact on health policy dialogue worldwide by using available data on mortality and disability and measuring health loss and population.

The more I got involved in the Global Burden of Disease study the more I realised we were dependent on creating ever more sophisticated mathematical modelling methods. But the solution to getting better information for governments was not so much in better modelling, but in better quality cause of death data, about better understanding who dies of what.

We are vastly ignorant about who is dying of what in many countries. And that’s why Bloomberg got involved in this project. Mike Bloomberg himself was surprised that much of the rest of the world doesn’t have data like New York City. He’s very focussed on information driving policy and understands how good data were central to the excellent public health work he led in NYC. He wanted to help other countries benefit from similarly useful public health intelligence.

I fully support this vision since any cause of death estimates by WHO or by the GBD have vast uncertainty. How, for example, can you reliably estimate the trend in lung cancer mortality in Myanmar when there is only a single data point? That’s where all the mathematical gymnastics comes in to get a best estimate but really, in the 21st century with all of our scientific and technological acumen, that’s not good enough.

The biggest misconception is that it’s too hard and can’t be done. The Bloomberg project and my leadership of it, is about countering that myth. That it actually can be done; we’ve developed new, more cost-effective measurement methods we’re starting to exploit. IT advances that are 1000 times faster than they were when I started in this field 30 years ago. We’re making use of these innovations, these methodological advances, packaging them, talking to countries, getting countries interested to see that this is possible, that they can benefit from these scientific and technological advances.

“It’s all too hard” is 1970s thinking; it is no longer applicable. Whenever I’m talking to a country, I stress that a) it can be done, and b) you really need to get better health data to better guide policies for health development.

The big information challenge in global health is moving public perceptions and the global health leadership away from the notion that investing in maternal and child health is all that’s required. That’s a 1970s way of thinking. Yes it was important, and is still important: there are currently 6 million children who die every year under the age of 5. That is a public health tragedy that we all must view as unacceptable; we have to keep up our efforts. But they are only a fraction of the vast amount of premature deaths caused each year by non-communicable diseases (NCDs) such as cancer and heart disease, and injuries.

There’s a massive amount of avoidable mortality from known risk factors about which we can do something using established interventions (such as smoking cessation programs) that we know work. And yet our public policy does not focus sufficiently or visibly on these routine risks to health, such as smoking, which daily cause a large amount of mortality. 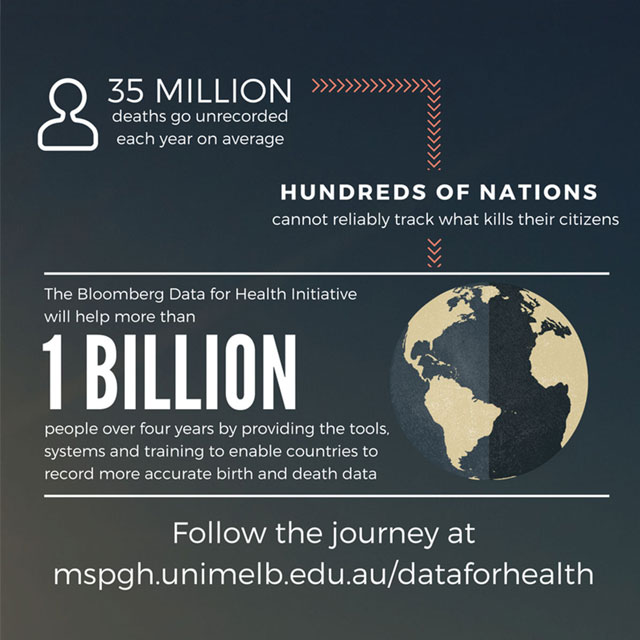 Preventing the 6 million people from dying of tobacco each year is unlikely to become a sensational headline, but is probably the most important public health challenge that we face today. Two thirds of the men in Indonesia and China are smoking and they’re going to start dying in large numbers.

We need to be careful to ensure that our health systems do not get distracted by the improbable, as horrific as they may seem, to the detriment of disease and injury control more broadly. The population health implications of Ebola can be severe given the case mortality. It does need to be addressed and we have good epidemiological surveillance systems, real time surveillance, capturing and following up focal events, understanding the local context of disease transmission. That’s all good epidemiological detective work. It has to take place. But it’s not the only thing.

Developing countries – with the exception of sub-Saharan Africa – already face a double burden where NCDs are now the leading cause of death and far outnumber deaths from the communicable, maternal and neonatal conditions. NCDs are already well advanced. Often these causes of death are 5 to 10 times more common than communicable, maternal and neonatal causes, yet the global community including WHO has not responded fast enough to this transition. It’s taken place over the last 2 or 3 decades and is accelerating and the countries themselves are not responding.

And that’s precisely the reason why the Bloomberg Data for Health Initiative is so important. It will provide the evidence that will undoubtedly confirm and refine what our estimates and models suggest – namely that NCDs are much more important than communicable diseases. But we want to show local evidence derived from local data systems to local policy makers to say this is what your epidemiological situation is, and urge them to focus on major NCD and injury control, as well as maternal and child health.

My dialogue with senior ministers and policy makers in countries is encouraging them to “have faith in me”. I try hard to help them see the gravity of the public health situation they are facing, and to have confidence in the measurement approaches we are recommending; all the while helping instill a new belief in the value of reliable and timely data as the cornerstone of any population health policy. That better data can really make a difference. I believe that.

– As told to Lisa Mamone

This article first appeared in Pursuit in 24 October 2016. View the original article.